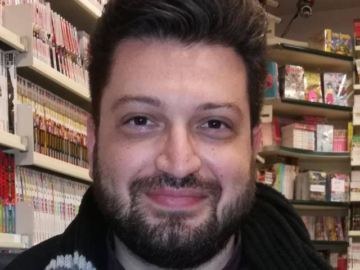 Claudio Loconsole (Eng.,Ph.D.) he is the scientifc responsible of the “Braille Lab” project funded by the Italian Ministry of Education, University and Research within the “Smart Cities and Communities and Social Innovation” call and a teacher of Computer Science at ITI “E. Fermi” in Lucca.

He is a former Post-Doc Research Fellow at Perceptual Robotics (PERCRO) laboratory, TeCIP Institute, Scuola Superiore Sant’Anna and a former Assistant Professor at Department of Electrical and Information Engineering (DEI), Polytechnic of Bari.

In 2012, he passed a semester as Visiting Ph.D. student at Universidade do Porto (Portugal).

He has been awarded with several international acknowledgments and prizes such as the first prize winner at “World Simulink Student Challenge” in 2011, the “Europe Future of Health Award” in 2012, the ETIC Prize (AICA-Rotary) for his Ph.D. thesis in 2013, the Tech Disruption Prize at the Global Impact Competition Italia in 2014 and the second prize winner at “Start Cup Toscana” in 2013 and in 2016.

He is also an invited member at AUDI Innovative Thinking community (2015).

In the field of robotics and haptics he acts as guest associated editor in Frontiers in Robotics and AI journal, as finance and publicity/media and website chair in Eurohaptics 2018 conference and as Publicity chair for Europe in World Haptics 2019 Conference.